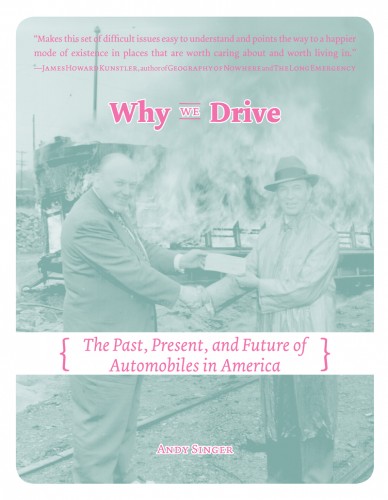 You may have seen the cartoons by Andy Singer that have graced the pages of Cycling Utah over the years. I became acquainted with the works of Mr. Singer many years ago before my association with Cycling Utah in the (now defunct) California based Auto Free Times and the Czech publication Car Busters magazines. Mr. Singer’s cartoons and illustrations have also been published in a number of magazines as diverse as The New Yorker, Esquire, The New York Times, and many others. I also read his first book CARtoons published in 2001. Given that, I have been a fan of Mr. Singer for quite some time.

So when I had a chance to read Why We Drive, I took advantage of that opportunity. I was not disappointed. Andy is a great cartoonist. His cartoons will provoke thoughtful laughs or perhaps emotional outrage. His cartoons however are only a portion of what Why We Drive is about. Mr. Singer has taken classes in civil litigation and environmental law and is able to see the legal and financial tax structures that perpetuate highway building. He eloquently displays this knowledge in the pages of “Why We Drive”. His cartoons are just a small part of a well written and researched book that will, as the title states, explain the reasons behind our car-centric culture that include the disciplines of law, finance, economics, sociology and psychology.

I have read a couple of books from Andy’s bibliography so I am familiar with much of what the book contains. Andy does a very nice job of organizing and explaining his points in the 151-page book in an entertaining manner. After reading the book I became both fascinated and somewhat frustrated by the history, some of it corrupt, of Why We Drive. If you want to see the big picture of the Past, Present and Future of Automobiles in America, read this book.

Andy points out that the automobile lobby is very strong. He offers a few solutions to counter it. First, ride a bike everywhere instead of using a car. In fact, becoming car-free is his advice. Andy’s most compelling advice is: “At some point, however, you must participate in the political process. There is no substitute for making major legislative changes. Meetings are no fun but political power goes to those who are willing to sit through meetings.”

I did have the pleasure of a short interview with Andy so I thought I might share his thoughts with the readers of Cycling Utah. In this way you can see the intellect of the man behind the cartoons.

Why We Drive: The Past, Present, and Future of Automobiles in America

An Interview with Andy Singer

Cycling Utah: Andy, I read your first book, CARtoons, and was a subscriber to Car Busters many years ago so I have been familiar with and a fan of your work. Why did you feel a need to write Why We Drive? Is it a follow up to CARtoons?

Andy Singer: Yes. After writing CARtoons, I became more involved in alternative transportation activism and did more reading and research. I took some classes in civil litigation and environmental law and started to see the legal and financial tax structures that perpetuate highway building.

A lot of people think that getting better bikeways and public transit is a cultural and political issue– that if we can just convince enough people to support these alternative transportation modes, they will get built. What I found is that we've set up transportation funding structures in state constitutions and state legislatures that overwhelmingly favor cars. Thus, when a local or state Department of Transportation (DOT) is faced with a transportation problem, they will almost always choose a highway solution because they know that it can get funding. Put another way, the local or state DOT will tell your cycling or transit advocacy group “We don't have the money to build your tiny (half million dollar) cycle-track in downtown.” Yet, when you look at their annual operating budget, they are often spending over a half BILLION dollars per year on highway expansion projects– widening existing roadways or building entirely new roads or bridges, even as vehicle-miles-traveled in America has declined slightly since 2008. In many states the state constitution mandates that gas tax dollars and motor vehicle fees have to be spent on highways. Often there is no comparable revenue source for transit, bike and pedestrian projects. Much of what was accomplished in bike and transit infrastructure in the last 20 years has been done largely with federal money. So I felt like someone needed to point this out to activists and the general public.

After writing CARtoons, I also got invited to do slide talks at a number of venues (mostly universities). So I spent a few years developing a slide talk that explained the social and environmental problems caused by cars and also the funding structures and history that causes America to keep building highways. “Why We Drive” is my attempt to make that slide talk into a book. It's focused on U.S. history and politics and has updated statistics and some maps and photographs. When doing slide talks, I found it was helpful to show people photographic examples of good and bad urban design or what a particular street or community looked like historically– before a highway or automobile boulevard was rammed through it. I'm hoping the book will focus activists on which state laws need to be changed if we really want to make progress and get out from under the boot (or tire) of the automobile.

C.U.: I read your interview in Atlantic Cities. (www.theatlanticcities.com/commute/2013/10/cartoonists-vision-car-free-future/7088). That moment in high school you discussed must have been quite inspirational when it was asked; “How did you become interested in issues of sustainability, transportation, and auto culture”. You used that answer in the first chapter of CARtoons. You currently live in Saint Paul but you previously lived in a number of communities according to the interview. Which of the cities would best represent your vision for transportation? Would any of the cities inspire another young high school kid to be inspired and follow in your footsteps?

A.S.: I was born in New York City and my dad lived there until his death. My mom and I moved to Berkeley, California when I was about 8 or 9. I've also lived in Ithaca, New York, Boston, Massachusetts (when my wife was getting her PHD) and Saint Paul, Minnesota for the last 13 years. Of the places I've lived, I think the big, older cities have done the best job making themselves bicycle, pedestrian and transit friendly– New York, San Francisco and Boston.

Chicago and some other cities seem like they are rapidly improving as well.

Of the smaller cities at the top of the pile would be Portland, Oregon, Minneapolis, Minnesota (our sister city), Berkeley/Oakland, California and a few others. Indianapolis just completed a massive cycle-track network in its downtown. Salt Lake City and San Diego have done a lot of stuff as well.

Next to these others, Saint Paul is actually very uninspiring when it comes to bicycle/pedestrian infrastructure.

As co-chair of the Saint Paul Bicycle Coalition our group and others are trying to push our city into the 21st century but we're getting a lot of resistance. The local public works department and county engineers and officials are very auto-centric. So it's difficult to get stuff done. We also run into the problems with state transportation funding structures like those I described earlier. Nevertheless, you can comfortably live in Saint Paul, any of the other cities I mentioned and just about any city in America without a car. It just requires a little planning when choosing where to live and work. No matter where you live, inspiration is out there for the taking. People are doing innovative stuff all over the country– even in small towns and suburbs.

C.U.: I've read a couple of books in your bibliography, Asphalt Nation by Jane Holtz Kay and Katie Alford's, Divorce Your Car. Is there a book from your reading that has been particularly inspirational to you?

A.S.: The Power Broker by Robert Caro is the most inspirational book I've ever read on the subject of transportation and urban planning …but I lived in New York City and knew many of the places and people he was talking about. I'm not sure if it would be as inspirational to others. The book won a Pulitzer Prize when it came out in the 1970s. Caro was a newspaper reporter who wanted to write a book about political power– how it was obtained and wielded and what role agencies played in government. In describing the life of Robert Moses, a highway builder, unelected state bureaucrat and creator of the modern “highway department,” Caro was able to describe (in a microcosm) the transportation and political history of America.

Another great book is Ivan Illich's “Energy and Equity.” That one is a quick read and (I believe) available for free on line.

C.U.: The University of Berkeley in California is considered a bastion of liberal thinking. You live on Berkeley Ave. in Saint Paul. Was that planned or just a coincidence:)

A.S.: It was just a slightly cruel joke of fate or some higher power. I always wanted to be able to live in Berkeley, California (closer to family). So fate said “Okay– you can live in Berkeley– Berkeley Avenue in Minnesota! ha ha ha!!” On the plus side, the cost of living is a heck of a lot lower in Saint Paul.

Thanks again for the interview and for reviewing the book.